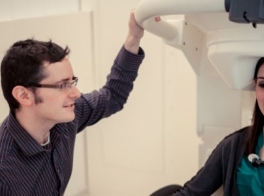 More than a third of people who have a stroke develop an invisible disability called aphasia, which occurs when there is damage to the language and communication centres in the brain.

While aphasia doesn’t affect intelligence, it can knock out the ability to speak, write, read, and understand speech.

Now, a unique collaboration among scientists at the University of Toronto, the University of Ottawa and Baycrest Health Sciences Centre, funded by the HSF Canadian Partnership for Stroke Recovery, is using three different kinds of imaging technologies to study how the brain can be reactivated and reordered with therapy.

“This study will ultimately help us understand some of the really fundamental issues regarding mechanisms of recovery in the brain,” says Dr. Elizabeth Rochon of U of T and Toronto Rehabilitation Institute. “Our findings will help inform the development of future therapies.”

Using brain imaging, scientists are examining six stroke patients pre- and post-therapy, looking for changes in white matter (the wiring that connects different brain areas) and changes in the regions that process the sound of words versus the meaning of words.

They hope to get a clearer picture of how a proven speech-language therapy rewires the brain. The therapy uses sounds to break down and build up words and help people produce the name of an object, picture or action.

“We are trying to find more converging evidence on recovery looking at different techniques and intensities of therapy,” says Dr. Carol Leonard of the U of O, who has worked with Dr. Rochon on developing and testing the sound-based therapy.

In recent years, there has been a shift in thinking about the neural mechanism of post-stroke aphasia.

“Symptoms are not just due to the area of dead tissue in the brain,” says Dr. Jed Meltzer of Baycrest, an imaging specialist. “There is abnormal activity outside the area of stroke damage . . .it’s worse than it looks on an MRI.”

While this new insight reveals that more of the brain contributes to aphasia than previously thought, the good news is that it may also be more amenable to recovery.

“By understanding the changes in brain activity that correspond to better recovery, we can tailor our therapy to produce those same changes,” Dr. Meltzer says.