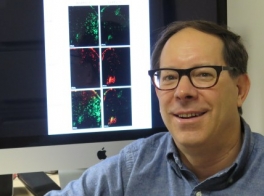 An innovative technique that uses light to turn on or off cells in the brain holds “tremendous promise” in the treatment of severe anxiety and depression after stroke, says Dr. Paul Albert, a professor at the University of Ottawa and senior scientist at the Ottawa Hospital Research Institute.

Dr. Albert is leading HSF Canadian Partnership for Stroke Recovery (CPSR) research into optogenetics, an emerging technology that aims to reset the balance in brain circuitry disrupted after stroke. The team is the only one in the world using optogenetics in an animal model of post-stroke depression and anxiety.

Testing of the game-changing technology is now underway in the mouse model, which was developed with CPSR funding, and early results are very encouraging, Dr. Albert says.

So, how do optogenetics work? The Harvard University-educated and Columbia University-trained scientist inserts genes into brain cells that, when activated by light, change their electrical responses. These light-sensitive genes make proteins that act like little solar panels on cells. When an optical fibre is inserted into a tiny adapter on the head, light can be used to target certain kinds of cells, altering their activity and relieving depression and anxiety.

Sound like science fiction? Actually, Dr. Albert says, “It’s not that far from reality.” In fact, he describes optogenetics as bringing a greater level of precision and sophistication to deep-brain stimulation, which sounded like sci-fi a decade ago but is now in clinical use.

Deep-brain stimulation involves implanting an electrode and applying a blast of electrical current to a larger area of cells. “It’s not that far of a stretch to go from electrode to a light fibre,” he says. “This could be the next step of refinement of that approach and a more effective treatment.” Research is probing which cells to stimulate and for how long. “All of these questions we can work out using our animal model.”

At least a third of people who have a stroke experience some degree of depression and/or anxiety.

Using the mouse model, Dr. Albert and his team are testing other approaches to recovery from post-stroke depression, including promising ‘combination therapies’ involving drugs and exercise. Researchers are trying to determine contributing factors to recovery, including timing and intensity of therapy.

“For patients it can make a big difference in their recovery if they’re being effectively treated,” says Dr. Albert, who was a faculty member at his undergraduate alma mater McGill University before moving to the University of Ottawa in the mid-90s. “The big problem with depression in general is that current treatment takes at least three to four weeks to kick in. And although 50 per cent might respond initially, in terms of a sustained response over a year, only 30 per cent are effectively treated with SSRIs, which is the first line of treatment.”

Funding from the CPSR has been critical to advancing research in this field. “It wouldn’t have happened if we didn’t have the CPSR funding,” Dr. Albert says. “It’s exciting to generate this mouse model and use it as a tool to see what ways we can improve recovery from stroke.”

Winner of the Hakim Award, Dr. Albert’s project was the top-rated catalyst grant funded by the CPSR in 2015.