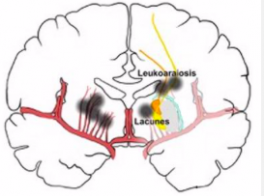 Adults who notice that they frequently lose their train of thought or often become sidetracked may in fact be displaying earlier symptoms of cerebral small vessel disease, otherwise known as a "silent stroke," suggests a recent study.

Researchers uncovered that individuals with damage to the brain's white matter, caused by silent strokes, reported poor attentiveness and being distracted more frequently on day-to-day tasks, according to a recently published paper in the journal Neurobiology of Aging. Despite these complaints, about half of the people with identified white matter damage scored within the normal range on formal laboratory assessments of attention and executive function (a person's ability to plan, stay organized and maintain focus on overall goals).

"Our results indicate that in many cases of people who were at a higher risk of silent stroke and had one, they saw a notable difference in their ability to stay focused, even before symptoms became detectable through a neuropsychological test," says Ayan Dey, lead author on the paper and a graduate student at Baycrest's Rotman Research Institute (RRI) and the University of Toronto. "If a person feels this may be the case, concerns should be brought to a doctor, especially if the person has a health condition or lifestyle that puts them at a higher risk of stroke or heart disease."

Cerebral small vessel disease is one of the most common neurological disorders of aging. This type of stroke and changes in the brain's blood flow (vascular changes) are connected to the development of vascular dementia and a higher risk of Alzheimer's disease and other dementias.

The strokes are "silent" since they don't cause lasting major changes seen with an overt stroke, such as affecting a person's ability to speak or paralysis. Despite a lack of obvious symptoms, cerebral small vessel disease causes damage to the brain's white matter (responsible for communication among regions), which can cause memory and cognitive issues over time.

Typically, this type of stroke is uncovered incidentally through MRI scans or once the brain damage has worsened, says Dey.

"There are no effective treatments for Alzheimer's disease, but brain vascular changes can be prevented or reduced through smoking cessation, exercise, diet and stress management, as well as keeping one's blood pressure, diabetes and cholesterol under control," says Dr. Brian Levine, senior author on the paper, RRI senior scientist and professor of Psychology and Neurology at the University of Toronto. "With the right diagnosis, these interventions and lifestyle changes give older adults who are at risk for cognitive decline some options for maintaining brain health."

The study looked at results from 54 adults (between the ages of 55 to 80), who also possessed at least one risk factor for a stroke, such as high blood pressure, high cholesterol, diabetes, sleep apnea, a history of smoking, past mini strokes and advanced age above 75.

Research participants had their brains scanned by MRI and scientists analyzed brain tissue damage, specifically in relation to white matter, to determine injuries caused by cerebral small vessel disease. They also took part in a number of neurocognitive tests and questionnaires that assessed their attention and executive function.

Following up on this study, researchers will analyze functional brain imaging and electrical brain activity from participants to look at the differences in brain networks. They hope to uncover why some people are still able to perform well on cognitive assessments, despite damage to the brain.

Support for this study was provided by the Canadian Institutes for Health Research and the Heart and Stroke Foundation Canadian Partnership for Stroke Recovery.

Baycrest is a global leader in geriatric residential living, healthcare, research, innovation and education, with a special focus on brain health and aging. Fully affiliated with the University of Toronto, Baycrest provides excellent care for older adults combined with an extensive clinical training program for the next generation of healthcare professionals and one of the world's top research institutes in cognitive neuroscience, the Rotman Research Institute. Baycrest is home to the federally and provincially-funded Centre for Aging and Brain Health Innovation, a solution accelerator focused on driving innovation in the aging and brain health sector, and is the developer of Cogniciti - a free online memory assessment for Canadians 40+ who are concerned about their memory. Founded in 1918 as the Toronto Jewish Old Folks Home, Baycrest continues to embrace the long-standing tradition of all great Jewish healthcare institutions to improve the well-being of people in their local communities and around the globe. For more information please visit: http://www.baycrest.org

The Rotman Research Institute at Baycrest is a premier international centre for the study of human brain function. Through generous support from private donors and funding agencies, the institute is helping to illuminate the causes of cognitive decline in seniors, identify promising approaches to treatment, and lifestyle practices that will protect brain health longer in the lifespan.